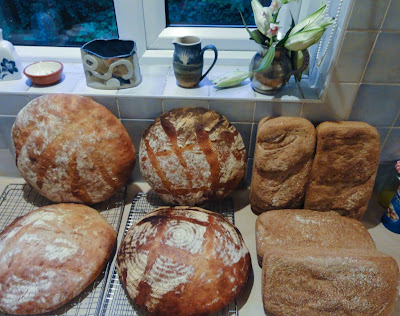 Last month in Oslo I spent the nights on a mattress in my host’s library. The first of many temping volumes was Tartine Bread. The author Chad Robertson has done years of research in perfecting his loaf – a white sourdough bread. Now we can all benefit from the result.

His method uses a high level of hydration which can give difficult handling, but he explains about the need to build up tension within the structure during shaping. My first attempt failed in this area and resulted in a wide pancake loaf, the second attempt is shown above. He also proposes a low / no knead approach, instead ‘turning’ the dough every 30 minutes during the 3 hour initial rising period to help develop gluten structure.

Having perfected his loaf for commercial production he developed a home-baking method. Then he put his recipe in the wild with a number of non-baking friends. Apparently they all adapted the method to their own lifestyles but still produced great bread.

Several used his recommended ‘dutch oven’ – a cast iron pan with a lid which contains the loaf and sits in the oven during baking. I’ve seen this advocated by other writers but this is one bit of equipment too far for me. I was however inspired to get a thermometer as he regards the rising temperature and time relation as critical to a successful outcome. His recommended rising temperature at 80 degrees F is very much lower than the hand-warm temperature I have used upto now.

He has also worked on creating his ideal baguette. The pages devoted to this are also very interesting. Again I will be thankful for the months of effort and research and trial and error which I expect will lead to a step improvement in my next attempt at these long loaves.