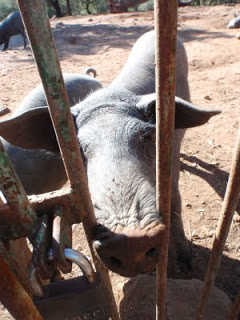 This fellow and many of his friends and relations are running around the hills of Northern Andalucia. We met more than a few on a two day trip to the Aracena national park area north of Seville.
Jabugo is a name well-known in Spanish ham, and our stop-off at Alajar was just a few kilometers away. Lucy and Angel at LaPosada http://www.laposadadealajar.com made good hosts. 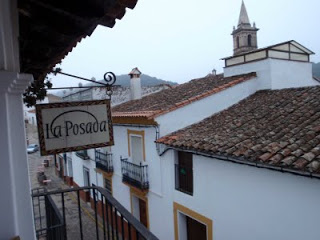 Their friend Juan Carlos has a place around the back of the Posada where he stores the legs of pigs from which he makes his living. Angel modestly says he doesn’t know if the local Jamon is the best in the world because he hasn’t eaten every kind of ham, but I have to agree with him that the very best I have ever tasted comes from here.
You can see my leg from Juan Carlos below. Does this ham have the same flavour as that from Ramon’s bar (he who keeps his own pigs)? Well not exactly! But is there anything to be found in the UK supermarket to come close? I don’t think so.
At first I felt resistant to the costs. 18€/kg for a front leg or 30€ for the more meaty rear leg.  On the journey home however we had a disappointing last night in a “special” hotel, and this lead me to compare a the cost of a pig’s leg to a night in a hotel room. The value – the pleasure given by the pig’s leg far outweighs even a good night in a hotel.
So here it it! 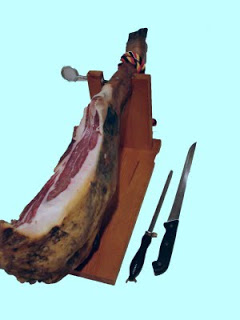 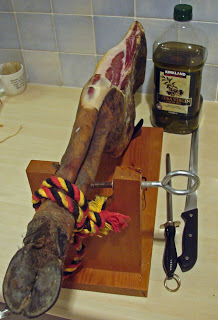