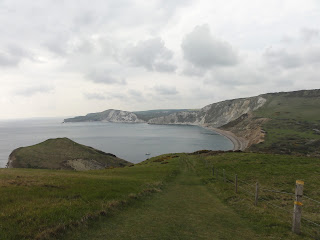 There are other challenges besides the 14kg on the back. One to do with feet – are they hard enough to take the battering in boots or shoes over miles of uneven ground? Another to do with Upness and Downess. The Upness compounds with the weight matter and the Downness can compound the foot challenge. The forth challenge is simply time – not much in the line of ‘normal life’ involves doing this for eight or so hours a day.

Here’s one of the nearest bit of up-and-down to the Bershire plain. The Isle of Purbeck.

Choose a day when the Army is not going to shoot you (find out when here). Start near Swanage. Head south to the coastal path. Then travel west until you drop with exhaustion. Sneek under a hedge or cliff for the night. Repeat in an easterly direction. You might want to do it in reverse so the early morning sun is behind you on the return.

The only logistical problem is to find water along the route. There’s some toilets open during daytime at Kimmeridge and at Lulworth, I also took water from the river at Lulworth and filtered this for drinking and cooking.

This reminded me that day two is usually harder than day one. Best have a short cut available for the return in case it’s not possible to complete the same distance.

You can see the profile above. Quite a few sharp upwards trajectories. Actually, cumlatively, probably something a little over half of the Upness appearing on the first day of my TGOC route plan. Nevertheless completely knackering. 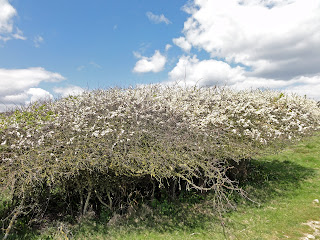 Here’s a hedge. More picturesque than handy for sleeping under being right on the path near Kimmeridge. Me, I slipped down the smuggler’s path at White Note (perilous and steep) to the undercliff where with fantansies of The French Leiutenant’s Woman I found a jumble of uneven ground and unfriendly undergrowth. The noise at dusk was deafening with birdsong. Unlike morning, which arrives in the shadow of the cliff above – chilly and quiet. 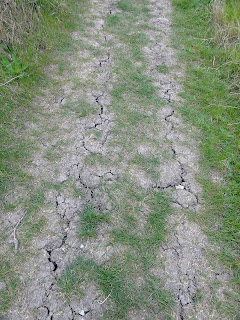 There is a drought in parts of England. This looks like one such place – with cracks appearing in paths which last autumn were greasy with mud. 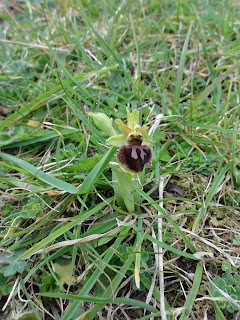 Dorset is famous for some things including rare flora. When I found a load of older people lying around in a field I knew something was up. I should have take a picture of them, but all I got was one of the rare Spider Orchids they were worshipping.