I keep imagining more challenges that will face us next week. Take Hummocks. My experience of Scotland indicates that as soon as you go off the beaten track there’s more than a 50/50 chance you’ll be in a landscape of large grassy clumps with various degrees of wetness in between.

For this 3rd little practise I decided to go off-trail in the Brecons. I’m sure the Hummock were smaller than I remember from up North, and the colour – I don’t remember this attractive blondness.

I hoped to test out my Oook mosquito protection on this trip, but unfortunately it hadn’t arrived. A bad weather forecast however meant I could looked forward to some excitement. Also a chance to test out the Spot mapping with social hiking.

Parking is usually helped by Google Street Map.  I found a bit of road within a short distance of the wild, and then checked around to confirm that the spot was overlooked. This time the folks at Meyrth Tydfil Golf Club did the honours. 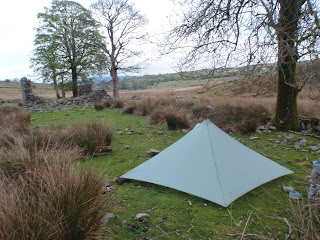 An hour into the hills found a suitable site shared only with a troop of wild horses.

The next morning I headed north east – trackless – the going was not too difficult. Is everything a bit smaller this far south? The hummocks, the bog, the hills.

The map shows many ‘shake holes’ and some ‘swallow holes’ in this area. What are these?! 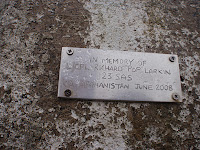 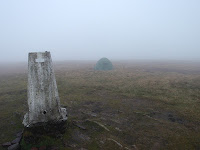 After a few hours I had ascended a hundred metres or so and the cloud had descended. Here was a trig-point with a large Terra Nova tent nearby.
And then I was back on paths. And with paths many people.

It was Saturday, but the weather was poor, so hats off to the Welsh folk for getting outside – in their hundreds! In case I felt a little special with my pack of 14kg there were several soldiers running up and down the hillsides fully laden. Pack weight? – ‘about 65 pounds” I was told.

Down the valley I could join the ‘Roman road to Hereford from Merthyr’. Up to the next ridge and I was tempted to make a diversion to the right and up a hill called Fan Y Big. In the cloud at the top I consulted a local munching a banana about the meaning of this name “big ‘ill” he said.

Then back and along the ridge top to Pen Y Fan,

and eventually down through the cloud and crowds to cross the road and onto a quiet hill on the other side.

It is hard to imagine why Eagle Star Insurance owned these mountains. It seems they donated them to the National Trust in 1965!

The long route from Fan Fawr pointed down to the forest in the valley floor and it was here I eventually found a tempting spot to pitch the tarp. 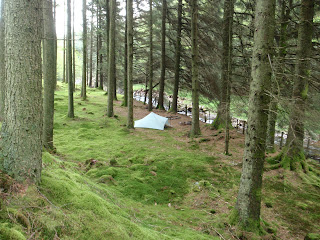 After 9 hours of walking I was exhausted but it was still only 4 o’clock. So here’s a reminder to take some reading material next week.

By nighttime the occasional gusty wind had become a continuous blow even in the area I had picked in the forest. It was a noisy night and with debris falling on tent, I didn’t sleep so much. I was outside when a branch pierced the fabric. 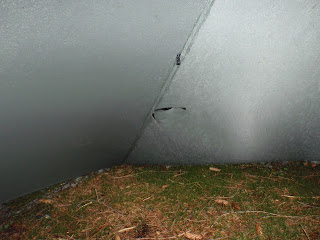 The devestation in my part of the forest was awesome. I had to crawl on hands and knees under the fallen trees along part of the track. As I walked further, on both sides trees creaked under the power of the wind and then heaved over. 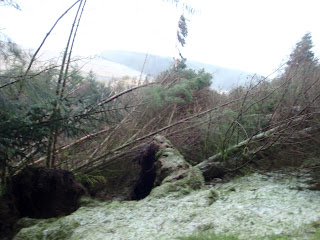 In the relative calm of the lower valley there’s some lovely carvings in the forest towards Merthyr. These by Tom Harvey. 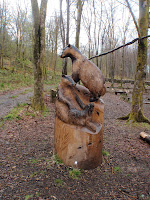 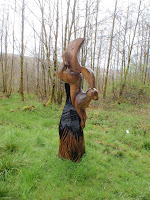 And many distinctly unartistic displays of beer cans.