The entrance to Hades is a cave near the southernmost tip of Greece. Leading to this and the three fingers of Greece pointing towards Africa is a land steeped in legend and marked by remains of the many civilisations that have occupied the area over 5000 years. 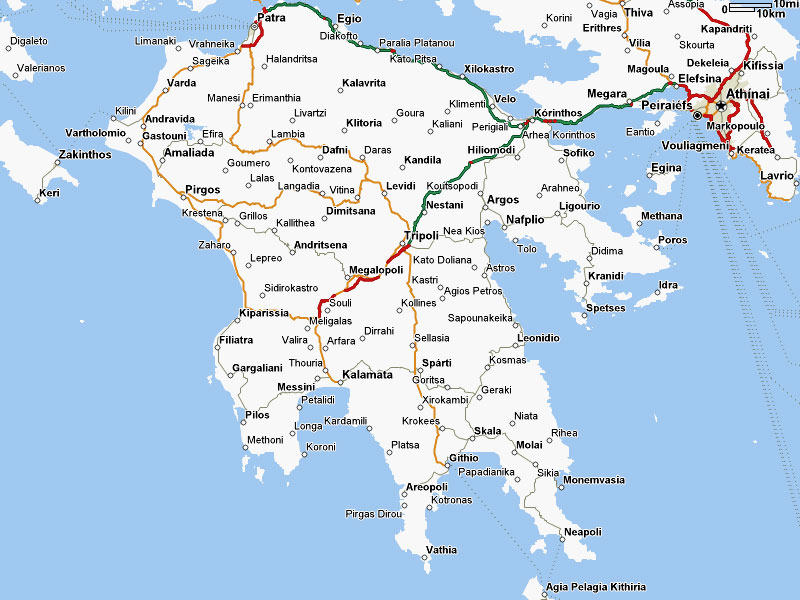 The Peloponnese always seemed less accessible than other parts of Greece, but this is an illusion. Now, with a good road heading from Athens to Kalamata the whole area is reached within 3 hours.
Nafplio is a short drive, less than 2 hours, from Athens airport and provided us with a pleasant and convenient base for reaching a host of important ruins including Corinth, Mycenae, Epidavrus.
The town beach although tiny provides good swimming and a short walk along the coast is the wide sandy beach of Karathona. Nafplio is dominated by two fortresses; our three days and nights did not give us enough time to explore these so we will have to return!

North of the town is Corinth, gateway to the Peloponnese. Here is the Corinth canal – looking rather small as you cross it on the motorway. The ancient town is an impressive concentration of remains nestling below a hill with the fortress of Acrocorinth dominating the skyline. Although Corinth was one of the most important cities of ancient Greece thought to have a population of 90,000 in 400BC, what is visible at the site is mostly from the Roman period when it was visited by St Paul (in 51 and 52AD).

The wide plain backing Nafplio was dominated by cities like Mycenae until about 1100BC, and there are many remains from this period across the landscape.

To the east is the remarkable site of Epidavros which was in use from 600BC until 400AD. Something of a ancient holiday camp, the sanctuary of Asklepius is dominated by the theatre with seating for 14000.

Near the theatre is the remains of a hostel with four courtyards each with 160 rooms. As well as a enormous gymnasium and baths there is also an extensive temple area where female guest spent the night and were supposedly given medicine and then dreamed about young boy gods who cured them of their ailments.

With the site being something of a resort, the local town for everyday living is thought to be several kilometres away by the coast. At the end of the bay in the picture above is the ‘Sunken City’. I went out with my snorkel and found just one building complex with walls and the bases of giant ceramic storage pots, but hardly a city!

Sparta famously defeated Athens, but there are not many visible remains of the ancient city. Nearby Mystra is on the edge of the Taygetus Mountains which bound the Spartan plain to the West.
Here are ruins of a completely different kind. On the slopes below a hilltop castle built by the Franks in the 1200s are the remains of a medieval Byzantine city with many churches and chapels that remain intact, most with frescoes in various states of repair.

The site was compulsory purchased by the government in 1953 to develop as a tourist attraction. Like many Greek sites the content is enormous and to restore it to a level where the totality makes sense to a visitor is an impossible task. One can however imagine the narrow and steep streets of a more modern Greek towns developing from these early origins.

The interior of the churches and chapels are covered in frescos and much of the painting seems rather crude. The stories and how the figures are depicted was strictly controlled by the church and these rules were codified in the 16th century.

There is a well built road over the mountains to Kalamata and the plain of Messinia. This ridge heads down the middle of the Mani to the most southern tip of Greece where it was believed a cave leads into Hades. Patrick Leigh Fermor jumped off a boat and thoroughly explored the cave in the 1950s and found no other exit.
Fermor lived in Kardymyli on the west side of this peninsula. We chose the nearby town of Stoupa for our next stop. This is a real beach resort. Before this, each stopping place – be it museum, or ancient site, or beach had a few tourist, but not many. So it was a bit of a shock when we arrived in the evening and found the bars and restaurants all abuzz with hundreds of English people.
While many stay in the town moving between beach and restaurant, this area is also popular for walking in the hills. We found it too hot for much walking in mid-September.

Fermor explains about his investigation of the culture of the Mani in his book of the same name. Many of the homes are built as small towers – an indication of feuding between families in adjacent towers. Byzantine churches and small chapels dot the landscape, many of them old and some pretty and decorated with crude frescos.

Further West, the 3rd peninsula of the Peloponnese is protected by the Venetian towns of Koroni and Methoni both with forts which would look out on the traffic between Venice and the East.

We stayed at Pylos, overlooking a spectacular natural harbour famous for the ‘accidental’ battle of Navarino involving a joint fleet of Russian, French, and British ships against the Ottomans.
Our hostess explained the 4 incarnations of Pylos. The current one is built below a fort constructed by the Ottomans in the 16thcentury. They relocated from Voudokilia with the Paleokastro constructed by the Franks in the 13th century. Nearby are many remains from Mycenaen times (3000 BC) but the main settlements for this period and the classic era are yet to be found.
One of the popular attractions in this area are the falls of Polilimnio. A gorge channels a river from pool to pool down between the hills. The local soil renders a bright blue colour in the water. We clambered up the steep path clinging to giant staples in the rock face. As we reached the top a dramatic storm started with torrential rain and thunder like a gun battery banging just over our heads. Fortunately there was a road which took us back down to the car park.
Pylos is a 3 hour drive to Athens airport, giving us time to visit ancient Messene on our return for an evening flight. This is a large site with remains of an impressive 9km long wall surrounding the wider area.
What you need to know. Andrew Bostock’s guide, now in its second edition provides coverage of the whole area. We sourced our maps in the UK from Stamfords – they have a supply of driving and walking maps. The Frytag and Berndt road map was a disappointment – although up-to-date some features were not well represented. I had read that this was hard to handle in the car and indeed it is necessary to stop and get out of the car when turning the map, without this it will get badly torn. There’s an airport in Kalamata served by ‘budget’ airlines from the UK, but Athens is just 3 hours drive away. Our car was supplied CarDelMar, a German company. The price was reasonable, the local company met us with the car at arrivals and took it back at departures.