Venison is the meat from deer. Deer embraces a range of animals from moose and elk to smaller roe deer. Because venison has less fat that beef it tends to be drier when cooked. This characteristic also means frozen venison can be stored longer than beef without spoiling.

Last Christmas we were visited by The Professor from Norway who came bearing a gift of a frozen brick – a piece elg meat. Now 12 months and one week later this was to form the base for our New Year’s dinner. When I contacted her about how to prepare it she couldn’t remember much about it – ‘probably cook it in the oven’ was the most advice I could get.


For cooking meat the most basic question is ‘is it tough or is it tender?’ I had no idea. Long and slow cooking is good for tough meat, but also brining is supposed to help break down some of the fibres in the muscle. Tender meat can be cooked much more quickly.
The general concern about venison is the drying effect of cooking.
My plan – defrost the 1.4kg piece of meat, then brine with some aromatic herbs to enhance the taste, then slow cook in the oven using a thermometer, searing afterwards. I would make a sauce separately.
Brining. I used 200gm of salt dissolved with heat in 2 litres of water. I included crushed juniper berries, dried sweet bay leaves, a couple of pieces of star anise, and some black pepper corns. The cooled liquid covered the meat in the refrigerator for about 24 hours. The debrining involved rinsing the meat under the cold tap than standing in fresh cold water for an hour – refreshing the water every 15 minutes.

Oven cooking. The target temperature for the meat was 60 deg celsius. To ensure a long cook with minimum drying out I set the oven temperature itself to 60 degrees. I used a separate oven thermometer to check the oven setting, and a meat thermometer to probe the meat. After 6 hours the meat temperature appeared to be around 55 degrees at the centre. I stopped the cooking and allowed the meat to rest for 20 minutes. Actually this seemed strange as my normal resting procedure is to move the meat from a hot oven to a warming drawer, but on this occasion the warming drawer was a similar temperature to the main oven.

Searing. One of the most important flavours of meat comes from the Maillard reaction that happens when it is seared at a high temperature. It is common do this first prior to the main cooking process, however to reduce the drying effect I did this last after the resting. I heated a large frying pan on high gas for 5 minutes, then oiled the meat joint and turned it in the pan so it was browned on all sides.

Sauce. This process does not produce meat juices to be used in a sauce, so this had to be tackled separately. I combined 200 ml port with 250ml of jellied beef stock and 200 gm of red berry jelly (in this case cranberry) in a pan. I added the zested skin of a lemon, and a small piece of cinnamon. The mixture was boiled and sieved before use.

The result:- perfectly cooked meat with a nice colour gradient from dark brown on the outside to red-pink at the centre and a moist and tender texture. Eating quality was good, but the brining contributed slightly too much saltiness without the expected flavours from the aromatics.

To serve with? A garnish of red cabbage cooked with apple, a celeriac and potato mash, and purple sprouting broccoli tops. mmmm.

And here’s The Professor, this Christmas more focussed on duck than elg! 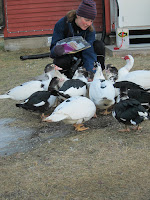