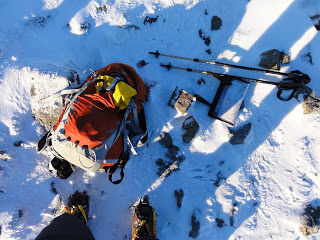 Winter can deliver some spectacular countryside and last weekend was no exception. The forecast promised a long spell of cold, clear weather and on Thursday it seemed to match the situation on the ground.

I parked the car by arrangement at Eskdale YH and at around 3pm headed off up the valley. Before long the light was fading and I needed to find somewhere for the night some several kilometres short of my planned spot.

This was my first winter camp with the MLD Trailstar. This pentagonal  tarp has been well-reviewed by Colin Ibbotson (review here) and is quick and easy to set up on flat ground. On typical UK mountain terrain however its a different story. Which local features can be inside and which should be kept outside? From which direction is the wind coming? And which side is preferred for the entrance?

Temperatures were down at -6 degrees during the night. The condensation on the inside was frozen, and there was frost on the outside too. The ground area covered is enormous and although the headroom isn’t great except at the centre pole there’s plenty of room to be quite untidy. I’ve made a ground sheet which covers half this area and which I slept on in the summer. This time I used a separate Rab Storm Bivi bag for sleeping on.

Key to keeping warm is an adequate clothes and sleeping bag, and a good insulating sleepmat. I was let down by my Multimat which seems to leak at the valve, so that within a short time I was lying on the cold hard ground. And there’s a lot of hours of darkness in winter (from soon after 4pm until about 8 next morning!)

Sunrise was announced for 9:30, but at 8.00 it was light enough to walk. An early start enabled me to get on Crinkle Crags for a late breakfast sandwich. With Spectacular views across all of the Lake District. Looking down on the Langdale Pikes! And across the sea westwards to the Isle of Man!

From the Southern end of the Crinkles the obvious ridge route goes north over Bowfell and Esk Pike. Icy snow underfoot, but so far secure enough. My target was Pillar and following these three tops I headed from Esk Hause down past Sprinkling Tarn towards Styhead Pass and Gable. The route across the front of Gable past Napes Needle is not the easiest to follow – with a sprinkling of frost or snow on the ground the path is hard to see, and with a large pack on the back it is more difficult to follow than in summer time.

Already 3.30 the light is beginning to fade again. From Beckhead on the north side of Gable a sightly downwards path crosses the back of Kirk Fell to Black Sail Pass. Suddenly it becomes necessary to find some flat ground again.

I found a small area close to a stream just a little down from the pass. And this revealed another shortcoming of the Trailstar. This spot was like a small roofless cave with quite high rock behind and on each side. The tarp covered the area, but there was no practical way to secure it well. The pyramidic shape really requires a flat pitch, and here without a 10-foot pole the central point just flapped around in the wind which started up later in the night.

This time temperatures dropped to minus 7. And it snowed.  And the wind blew the snow. And it blew it right into my ‘cave’ which became something of a snow drift. Fortunately the bivi bag protected the parts of me that couldn’t fit under the tarp.

By daylight it had stopped snowing and after digging out my gear I found my way up onto the ridge to Pillar. Another brilliant morning with views across to most of the peaks in the Lakedistrict, the hills of southern Scotland, and the Isle of Man, and the off-shore windfarm in between.

Beyond Pillar is Scoat Fell with a small outcrop called Steeple. The cold wind and the icy rock pointed me away from this diversion and I headed back towards Wasdale over Red Pike and down besides Yewbarrow.

Although not much after 1pm I needed to plan for the night as little more than 3 hours of daylight remained. With my failing sleepmat, my dead camera batteries, and a frozen gas stove which refused to boil a second pot of water in the morning (the snow melted from the first boiling had frozen in the works below the flame including the valve from the gas canister) – I decided not to spend a 3rd night outdoors. The options seemed to be Wasdale Head Hotel or walk over to Eskdale. In the bright sunshine it was hard not to believe they’d be full at the Wasdale Head so the long walk won.

A friendly warden had met me 2 days before when I had arrived at Eskdale YH for parking the car. Now, in the dark of a Saturday night, I found a notice on the door ‘Youth Hostel Closed for Winter’!

It is a strange season to look for a room in this quiet part. Most places have closed their rooms up, and run with a front bar only. I went from place to place up and down the valley. Eventually I found the Bower House – right at the bottom of the valley which was running normally. With a blazing fire a welcoming bar and an extensive menu this was just the job .. ..