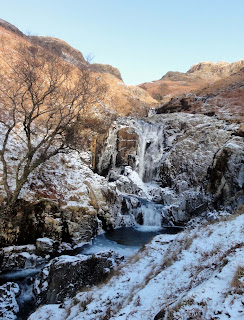 My memories of this area are from the 60s, plunging into the cool pools of upper Eskdale as relief from the summer sun. Different, but just as pretty to look at are the frozen falls around Throstle Garth below Thorneythwaite crag at the end of November.

This route to Scafell is one of the best. Long. A long trek in through the varying scenary of upper Eskdale. Now the faint paths are obcured by snow and frost, and the wide boggy area of the Great Moss is comfortably and firmly frozen.

Cam Spout, on the far side below Broad Stand and Mickledore and leading to the ridge is just a twist of frozen green ice.

Me, I chose the next indentation between Broad Crag and Scafell Pike with a diagonal upwards traverse across the front of Dow Crag then up to the cwm above Little Narrowcove.

There were no footprints here until the ridge. Here the east facing slope of Scafell Pike was a hard packed slope of ice and snow with just a few old and insecure steps kick into the surface. Time for the Grivels! I’d carried crampon all weekend and this was the first time I felt the need for them.
Lunchtime on the highest spot in England also meant that it would be dark in a few hours. My way back was over Scafell to the west, and I could make out a snow filled Lord’s Rake below. In the picture you can see the diagonal white strip to the right of the mountain mass.
In case of mist you have to remember ‘up three times, down twice’ for Lord’s Rake.
From the top of Scafell a final look at the panorama to the east (here with Scafell Pike) before the long race down the ridge to beat approaching dark. [click to enlarge!]