The night train is a great way of getting from London to the Highlands once you are reconciled to spending the money! 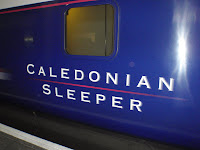 Two trains leave Euston station in London. The ealier one will drop you at your destination in the morning. The second train leaves just before midnight and ends at Glasgow, so you need a conecting train to reach your destination soon after midday.
On this occasion, somewhere in the night, there was a suicide on the line. All the trains were disrupted, and very delayed. I got as far as Blair Atholl and for the last 20 miles hitch-hiked, eventually arriving at Dalwhinnie at 4 in the afternoon. 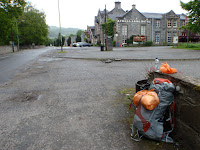 The mountains around Ben Alder are ‘remote’ – which means a long walk in. Many cycle the route beside Loch Ericht to Ben Alder Lodge and the open countryside beyond.

After 2-3 hours a small pause in the continuous rain reveals the welcome sight of the bothy at Culra Lodge. 3 rooms for shelter.

The morning brought a break in the weather,  and I  headed off to the ‘almost scrambly’ ridge leading up to Ben Alder. Making a circuit – over the top and across the bealach to Sron Coire and Beinn Bheoil – is the natural way to go. During the day there’s every possible kind of weather from giant slow-falling snow flakes, to horizontal sandblast-like hailstones, to rain at every angle, and low cloud, and high winds, and even a few short spells of sunshine.

In May the days are pleasantly long and this first walk lasted little more than 6 hours so on return to the start there was time enough to reach a new area. Past Loch Pattack I headed north along the Pattack river and found a camping spot close to the falls in a bit of woodland full of signs of deer. 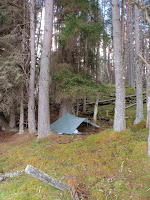 Here, some distance from any track, there’s crow trap. Three compartments in a wire mesh cage with a live crow shut in the centre part – with some water and food. Either side a compartment with a perch which, if touched would cause a trap door to close. What is it for? I’m not sure: would it trap crows looking for a mate? or a predator? Either way it is probably not benign.

The next day I looped round to the north and west past the first of two lochans to approach Geal Charn from the North side. The route is served well by a landrover track and on this Sunday morning without a soul on foot, bike, or landrover the landscape is picturesque in a desolate sort of way. 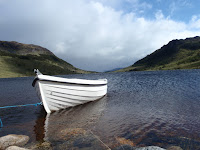 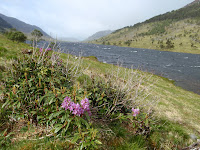 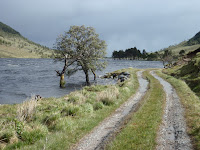 Geal Charn has a curious North side – deeply scored by several streams with banks 20 or so metres high on each side. The dips are pleasant to walk in, alongside a stream – but you can’t actually see if you’re going in the right direction. Eventually it is necessary to leave these and head up to a bealach where a path invites you into the arms of a Coire below the top. Using my walking poles shortened to act like ice axe sticks I pulled myself up over a small snow field onto the ridge.

The characteristic top of Geal Charn looks down onto the neighboring Munro Creag Pitridh. 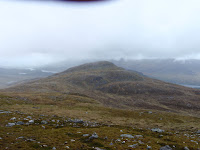 Here the wind was very fierce and it was good to get down to a recognisable path. This dropped down to the second of the two lochans with an attractive sandy beach. 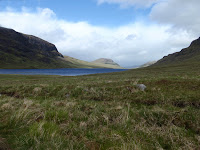 On the map both Lochans are called na h-Earba. The path divides a little further on – one branch towards the A86 and the top of Loch Laggan just a couple of miles away. The other heads south back towards the mountains, passing the ruin of Lubvan which make a beautiful remote and exposed camp. The trailstar once set-up shrugged off the wind which quietened in the night. 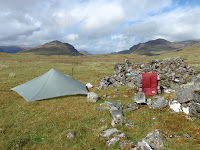 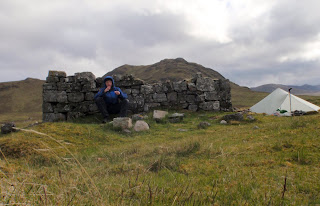 The path follows the stream up to a spot marked ‘stepping stones’ on the map. On the ground – no sign, just a river to wade across and then the path disappears. Time for some heather bashing towards the top marked Beinn Eibhinn. 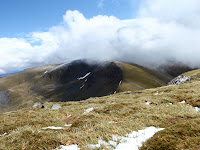 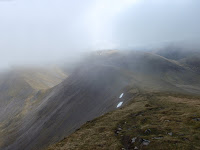 This impressive and interesting ridge heads east over several munros. It is commonly approached from Loch Ossian, and this route misses the relatively minor top Meal Clas Choire. Continuing from Beinn Eibhein over Aonach Beag, Geal Charn (another one!) towards Carn Dearg, there are great views on both sides and a dramatic (but not exposed or even scrambley) rocky route down between two lochans in the move from Geal Charn to Diolliad a Chairn. 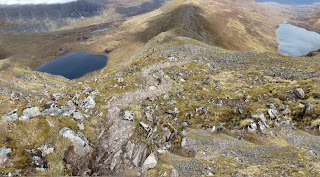 At the last top Carn Dearg it is possible to head down East & South to the bothy at Culra and Loch Pattach and the route out. Me – I headed north-west to the top of the trail through An Lairig to pick up a small path which heads east on an upward diagonal across the side of Beinn A Chlachair which was the target for the next day.

The shoulder just below Bealach Leamhain provided a piece of dry and level ground for the trailstar shown here with the distant view of the Ben Alder group and the ridge to Carn Dearg on the left. 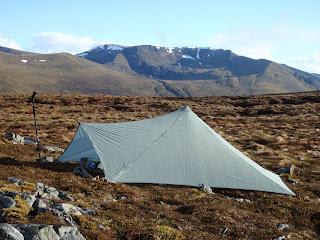 A cold night with the evening rain drops frozen on the tent surface and a sleeping mat which required reinflating every hour or so, meant an early rising. The path to the top of Beinn a’ Chlachair is easily navigated even in cloud, and the return back to the Bealach.

This is my last day. As the train leaves from Dalwhinnie at 10pm, a full day is still available for walking. From the map the obvious next option was to ascend Geal Charn again, this time from the south and then follow the path from the bealach on the north side to the east down towards Pattack river.

This proved a rewarding choice with fine views and some deer and ptarmagin, and a pleasant stream in which to bathe my battered feet. 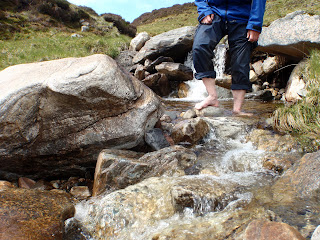 The walk out, at the end of the day is long and not pleasant. More than two hours on the gravel road with little variation to please the eye, and made worse because of soreness on my feet from walking with wet boots and socks.

I looked forward to getting an evening meal at Dalwhinnie and dreamed of using a shower before the train arrived. The sign below, outside the boarded up Dalwhinnie Hotel, is all the more poignant as absolutely everything here is closed except the toilets and the waiting room at the station.

I had the station to myself for a couple of hours which gave me good time to apply first aid to my feet, to repack my bag, and to cook up my last cup of mulagatawny soup. 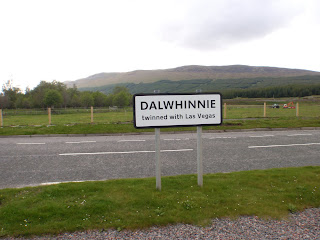 And when the train arrived there was a welcome buffet car with food, some warm water in the cabin for a clean-up, and a comfortable bed for a good sleep. So all ready for work at the office the next morning, with only a slight limp to hint at my weekend away!
[note: you can click on any picture to see it in enlarged … ]

2 thoughts on “Ben Alder & The Night Train to Dalwhinnie”