What will set the limit? i) Two months after an arthroscopy, will it be the knee?, or ii) With no long walking for many months will (un)fitness by my undoing? or iii) as we approach the shortest day of the year will the number of hours of daylight?

The route starts at Caversham Bridge in Reading and follows the Thames upstream west and northwards to just before Wallingford, then eastwards on the Ridgeway until Nuffield before heading south through woodland and across fields back towards the Thames and the start.

It is designed so that it can be shortened by reducing the circuit, or by cutting it short and picking up a bus which travels regularly along the diagonal red road the A4074 back to Reading. 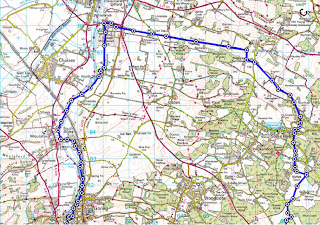 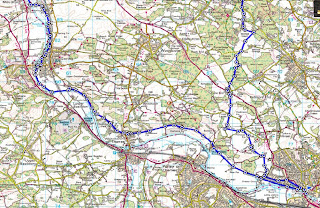 Sunrise happens soon after 8am at this time of year, and this is a good time to start out.

The Thames Path switches from one side of the river to the other. From Reading to Whitchurch it follows the south bank, but the north side is more pleasant. The paths are a little distance from the river, but the old village of Mapledurham and the llamas of Boze Down more than compensate for this!

The path finally reaches the river just before Goring and at the same time as the busy west bound railway line arrives over a brick bridge. With trains every 5 or 10 minutes their noise is a constant companion for the next hour or two until a much more impressive brick bridge takes the line back to the south.

There are some impressive properties overlooking the river. But also some that are not in such good condition. Beyond Goring the sliver of land between the railway and the water is divided into small ‘leisure’ plots, which look sad and uninviting on a winter’s day.

After the prosperous village of South Stoke an impressive brick bridge moves the trains back to the other side of the river and the path becomes more rural, and quieter. A little further on is North Stoke with and impressive 13/14 century church with original wall paintings. 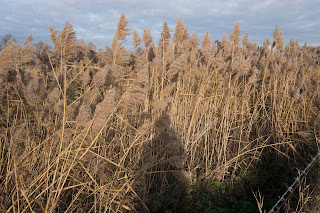 Soon after North Stoke we head away from the river on part of another national path the Ridgeway. Within a few minutes we are on a long and mysterious ancient structure called ‘Grim’s Ditch / Dyke’. This starts as a single embankment, but later become two banks with a deep ditch in between and stretches for about 8km beyond the village of Nuffield in the East.

South of Nuffield and Nettlebed the countryside is served by a great network of paths to navigate back towards Reading and the Thames. The prosperous Oxfordshire countryside is populated with a mixture of the old and the new – mostly well maintained properties – not all are financed by their association with the land. The attractive 17/18th century English Farmhouse is a case in point with neat stacks of cut timber for burning and surrounded by mown grass fields and many outbuildings. In one of these I found a Dave of Cobalt Blacksmiths firing up his forge while his friendly labrador sat out in the weak afternoon sunshine looking for passing walkers. There was not a horse-shoe in sight – it seems that jobs mostly come from restoration work, supplemented by domestic and artistic commissions.

As soon as the clock reached 2:30 it was time to reassess the rest of the journey. Walking in the dark was not part of the plan. By cutting a few corners I could trim some minutes off my journey time and a small re-route put me on paths I knew well, and could manage in the failing light after sunset. This was due around 4pm and I knew I could then count on another 30 minutes of partial daylight.

Navigating past Stoke Row to Cane End it is still easy to avoid walking on roads. And by now the mist is rising from the fields in the dwindling light. A route familiar during daylight hours take on a mysterious atmosphere.

So the answer is iii), time was the limiting factor. I can’t deny, though, that I was very pleased to take off my pack and lie down for a bit! [usually you can click on a picture to enlarge it]