It is now nine weeks since the knee operation. There’s been remarkably little pain and I have been able to increase my walking distances without incident. At the 8-week check I was given the all-clear to increase distances while ‘listening to your body’. Time for a trip to the mountains!

A trip to North Wales was in order. Here I could take walks over different terrain producing a variety of tests and strains on the body. I was lucky this time to be accompanied by the Native Welshman – a good help with motivation, but also handy for translating place names and filling me in with local history.

We hoped to stay at Plas Y Brenin mountain centre, but as usual it was full with course delegates and had no room for casual visitors. Out of season, there should be no problem finding accomodation and we had a great mid-week deal at Snowdonia Mountain Lodge. Configured like a motel, we had a comfortable room right next to our parked car. A twin room for two nights including breakfast cost us £90.

We started from home early and got to the area by the middle of the day allowing a few hours for walking and  acclimatisation before nightfall.

One of my favorite short excursions in this area is on Cnicht. A little to the south of the main Snowdon group, this distinct hill provides an easy but interesting ascent with a fabulous unfolding view towards Porthmadog and the surrounding seascape to the south. The forecast was not good, and this was the first hill the Native Welshman had encountered in a while.

We marched / staggered up to the ridge below the top, buffeted by strong winds. NW had reached his physical limit and short bursts of ‘face exfoliating’ horizontal hale stones reinforced our decision to head back down. This was probably necessary anyway to ensure we were not night-bound on the hill side as at this time of year darkness arrives soon after 16:00.

This short round normally takes about 4 hours and the views are stunning with Snowdon always in sight to the north west. The round is best tackled in an anti-clockwise direction. Navigation up is easy. The route back follows the ridge which soon becomes wide and grassy and, as the paths are faint in some places, it is possible in mist to get confused about progress towards the turn which leads back down to the road.

The nearest town to the Snowdonia Lodge is Bethesda. This sad and grey place is famous for a strike by quarry workers in 1900 which resulted in a 3 year lock-out by the landowner Lord Penrhyn. The slate which used to be exported all over the globe was regarded as the world’s best. There’s a few shops and chippies but nowhere obvious for a meal.

We enjoyed evening meals at the Bryn Tyrch Inn just east of Capel Curig and the Vanyol Arms between Bethesda and Bangor. It is hard not to prefer the more local atmosphere of the Vaynol Arms although the food was good at both places.

On crossing the carpark to the breakfast room at the start of day 2 the air was damp and cold. The ridge across the valley where I planned to walk that afternoon was hidden in cloud. The forecast however promised clearer skies later.

We walked directly from our room heading down the A5 a few hundred metres to join the lane linking the farms on the other side of the valley. An hour brought us to the Youth Hostel and car park at Ogwen Cottage, just beyond the point where this picture was taken.

The old stone building with toilets and hole-in-the-wall cafe has gone to be replaced by a structure in steel and wood and glass. This ‘Warden Centre’, although partly closed when we walked past looks much more inviting than the facilities it replaced. The toilets and a new cafe with the same staff were open and welcoming.

We continued up to Cwm Idwal and the Native Welshman reminisced about childhood picnics on the shore of the lake with grandma in high heeled shoes. On the other side we could see the route up to the ridge known as ‘the devil’s kitchen’ with a prominent black scar known locally as Twll Du. This translates literally to ‘black hole’, but according to NW actually means ‘devil’s arsehole’ or more commonly something even less polite.

The path around the lake reaches to the start of the rocky route upwards. Here we temporarily parted company. NW to socialise with the couples from Essex and lads from Poland and the proprietor of the cafe and the area warden. And me to the snowy mists enveloping the high ridge and the path to Y Garn.

A team in army uniforms heading for the valley passed me just where the steep route up levelled out in a jumble of snowy rock. There was just one other walker to be seen all afternoon. This ridge walk is fine on a good day with views on both sides and eventually straight ahead to the sea and the island of Angelsey. The edge on the right side has some impressively steep and craggy drops down to the hanging valleys above the main valley bottom.

In misty conditions the views are not so impressive and a compass is necessary to get the northerly bearing which leads towards the end of the ridge. Here at Carnedd y Filiast the rocky outcrops are hard to relate to the map when visibility is limited and to confirm the route down I reached for the GPS. My new Garmin device with its copy of the Landranger OS maps (1:50000) did not seem to correspond with my paper OS Explorer map (1:25000).

I discovered later that more set-up was needed to allow this device to be used as I wanted.

Dropping down at the end of the ridge, the view across the Penryn quarries and Bethesda gaves glimpses of the sea and, more close by, the twinking lights of the Snowdonia Lodge complex. It is hard to find a path down and some heather-bashing is inevitable, even in good weather. Last time I was here I had failed to pack our sandwiches and two of us lingered on the slope to gorge on blueberries. Now I could see that many of the blueberry bushes had been burned.

A short while later I reached the road, just as it was getting dark. Back at the lodge the Native Welshman was waiting to relate tales of his encounters of the afternoon. The lesson for tomorrow was to start early as there are limited hours of daylight at this time of year!

The next day we were driving back South so our time in the hills was limited. Given the constraints we searched out something new – a low-level walk with at least a little bit of excitement.

We headed for Dolwyddelan along the road from Betswy Coed to Blaenau Ffestiniog. Some good walks can be constructed here making use of the local railway to return a start point based on any of the stations on the route.

We left the car at the station carpark and headed up into the hills above this small town. The woodland paths were not easy to locate, but we successfully reached the moor above and crossing farmland and  forest we worked our way around to a point some distance down the river. Here we could pick-up the path which follows the railway along the river back to Dolwyddelan.

On return we noticed that we’d parked in a ‘voluntary’ pay-and-display carpark. Is this the only one of its kind? If you click on the picture you should be able to read the text on the sign to the left. 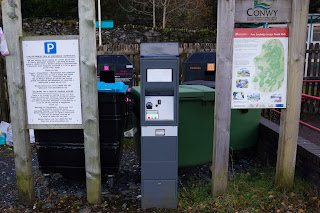 And not a single twinge in the knee!