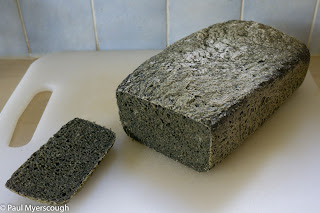 One of the first herbs to appear in the spring is the common stinging nettle. Foragers everywhere start on nettle soup. But if you leave it many weeks those temping bright greens turn grey-ish and dusty, agressive looking and stinging.
This year I managed to investigate before the moment had gone – not with soup but bread. 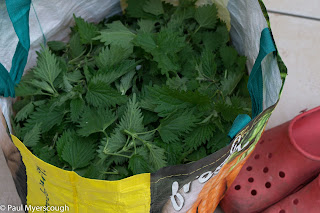 Gather the nettles wearing gloves. Take the tender tops. They don’t weigh much – the bag above has about 600gms. 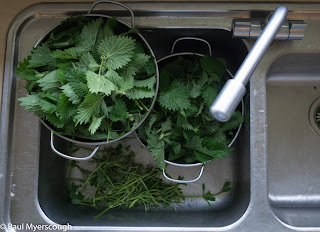 Rinse in cold water and drain. Pick over discarding any tough stems. 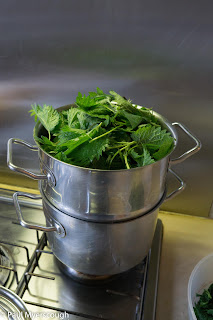 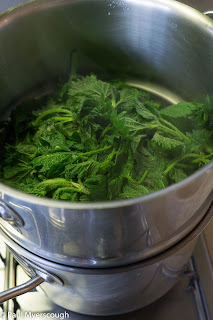 I steamed for a minute or two to remove the sting – like spinach the volume reduces a lot. Use as little water as possible – the leaves contain quite a bit – and you want this essence to go into the bread. 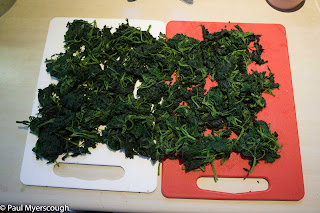 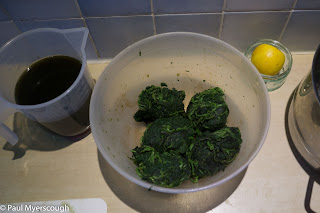 Squeeze the liquid out from the leaves and conserve – I had rather too much here for my needs. Cut
the leaves reasonable small so that the nettles disperse easily when making the dough.

Make the dough. I used a ratio of around 600 grams of leaves (as picked) with one kilo of flour.

I used a sourdough starter to make a levain, but that is not essential at all. It is worth noting that the quantity of water in my levain reduced the amount of nettle liquor I could use. The levain accounted for 450gm flour and 350gm liquid from the recipe quantities below and was allowed to develop overnight at room temperature with the starter. 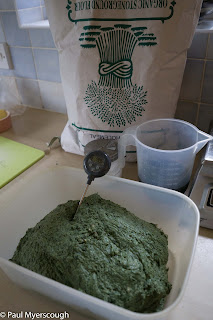 The dough is a surprising green colour with a slightly grassy smell. It developed over about 2 hours at 80 deg F before shaping into 2 tins. Here the loaves were given two hours rising time before baking  at around 220 deg C for 40 mins. 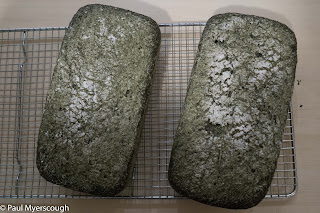 You might expect some structural problems with such a large quantity of green stuff in the loaf but the crumb is fine and even and it eats well as bread or toasted.

The verdict? A dramatic looking loaf providing a good accompanyment to soups, and to jazz up the breadbasket at the dinner table. On taste? Not so dramatic considering all those extra nutrients – I shan’t be in a hurry to make nettle soup. For a seasonal taste consider also a fresh herb bread – see here satuday-bread-with-greens. 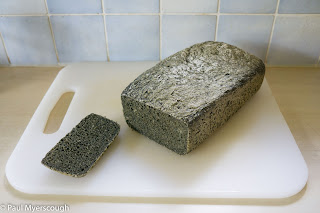