One of the latter, I think gave me a packet of potent seeds which I planted more than a year ago. In autumn this bed showed a crowd of healthy looking plants which zoomed up in spring to provide this spectacular show.

Of course, they’re overcrowded despite some thinning out, but what are they? I’ve been through my records of seeds bought and I cannot find any name which googles to reveal something like this. 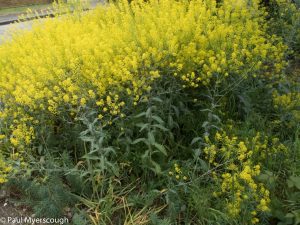 Now in the second half of May the flowers are almost finished, leaving this light green sprays of stems which, I guess, will eventually by covered with seeds.

It was always a thrill when these seeds arrived – particularly the non-anonymous packets. White packets with a Latin name typed on the front gave no clue about what might eventually appear from a successful germination.

These often included some strange plant indeed –  a ‘blue sausage’ plant from China was one which sticks in my mind, and rare cyclamens from Palestine. Sometimes there would be several packets of tree seeds – from Scandinavia, the Alps, or Australia. Sometimes germination would require repeated sessions of refrigeration to simulate winter time. Sometimes there’d be several packets of seeds of familiar or unfamiliar local wild flowers which would germinate quite easily.

They counsel waiting at least two years before giving up on a seed. I found by then my label had fallen off or faded and become invisible. Many trays and modules by the second year were germinating local weeds. One tray was strangely full of beech tree seedlings, handily just when I needed to replace a hedge – but none of the packets I had bought had been labelled ‘beech’.

After several years my thrill is tempered by a weariness. A packet has so many seeds in it and some of the more exotic ones need special care. Very quickly I found I had a job of unmanageable proportions keeping hundred of plants and their different requirement clear and separated in my mind.

Much easier to buy just one or two packets and concentrate on those, and then bulk buy the rest ready growing from a garden centre.