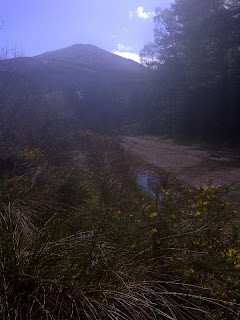 Day 5 was another one of two different halves. First a long trek along a valley following tracks and paths partly in forest. The next part was to follow a ridge of tops leading over to the next valley and civilisation of a hostel.

Catching up the lost kilometres from yesterday took more than two hours. Then the early part of the path that followed was quite unused extremely wet and very hard going with feet sore from the previous few days.

By 2pm I was near the approach to the ridge, but after 7 hours of walking it felt an impossible target and I stayed low. A signpost indicate the direction, but there was no path. More than 3 hours later I reached the other side.

I spent time planning my moves for the evening. First stop at the famous pub on a barge. A large drink. A meal something traditional rather than exotic. A bottle to take down the road to the hostel.

When I finally crossed the Caledonian canal at Laggan Lock I saw a big sign ‘closed’ on the barge. My fantasy dashed I limped on to the welcoming hostel and ate one on my rehydrated meals sitting on a chair at a table.