What is the best GPS for the backpacker and walker? It is hard to find a definitive answer to this – I’ve been looking for more than a year.

Without great conviction I’ve settled on the Garmin GPSMAP 62s in the knowledge that it is at least better than some.

My first GPS was the Magellan 2000 XL. Probably the model was named when year 2000 seemed a long way off and full of futuristic promise.

It worked fine. When in doubt – switch it on and wait. After a few minutes it would produce the lattitude and longitude position and the translation into whatever map system was required. You needed to match this up in advance – OS references for UK, something different for Spain. As long as I had the right map I could confirm my exact location. For many years it served as a back-up and safety system. Used 2 or 3 times each year.

My next GPS was the Magellan SporTrakCOLOR. 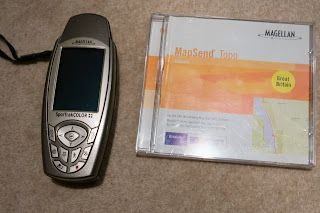 The old one worked, so why change?  I remember an occassion in the Spanish Pyrennes amongst jaggedy outcrops of rock when map reference from the GPS and map was not enough to confirm that I had reached the top, some further confirmation was needed.

New features on the SporTrack included an electronic compass and a barometer.  The barometer provides a reasonably accurate elevation above sea-level, which itself checks against map coordinates. Belt and braces, is always good when safety is a concern. And a colour screen which could display maps. For £100 or so I obtained a UK topological map based on OS 1:50000.

The map adds another level of support – for example confirming you are actually on the path you expect to be on and not a sheep track. With a screen 5×3 cm this could never replace a paper map though, but in an emergency … ..

Many of the GPS features are about maintaining routes and tracks. Plotting walks on the PC however and downloading them to the device is not of interest to me. I never planned to use it while walking as a turn by turn guide. For round trips I sometimes recorded the start point in case of any problem finding my way back to the car, but I have never needed to refer to this. So the Magellan worked well but travelled with me mostly as a safety device and on many trips it stays unused in the bottom of my pack.

The main shortcomings of the SporTrak is with the memory and mapping software. The device will hold a significant area of mapping, but not the whole UK. So it is necessary to switch area from trip to trip – downloading North Wales for example, or the Lake District. And although the software works fine on my old Window XP PC, I hav not managed to configure it on Windows 7.

With more time for planning walking trips, it is time to upgrade again. Since my last purchase the GPS market has increased enormously, the technology is mature and I should be able to get a fine reliable device that is easy to use and compatible with a range of readily available mapping data.

There are a couple of choices to make before zeroing in on a brand.

First a dedicated GPS or one that uses software on a mobile phone? My experience with smart phones has not been great – with too many apps clogging memory I have found reliability wanting.

More and more, dedicated GPS is delivered on a touch screen device. This gives the oem flexibility for the user interface – and reviews indicate some of these devices are very easy and efficient (quick) to operate. Using a touch screen with gloves however does not work, and this has lead me to stick with push button controls.

Garmin probably has the biggest market share, which means their customers have the biggest voice and are hard to ignore. In the absence of any negatives, I’ve gone with the flow – and taken a good offer from Above and Beyond for a unit including full UK OS 1:50000 mapping. (They also have some great offers on current Magellan kit). 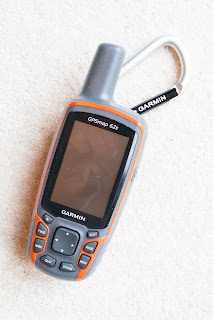 1. This is not a generational leap. On the face of it features, controls, performance are similar to my previous GPS.

2. Weight. A big disappointment is the size and weight of the unit. The old unit with similar tough and waterproof casing weighed-in at 190gm including batteries; the Garmin GPSmap 62S despite its neat appearance is big and heavy in the hand, and weighs 220gm plus an extra 34gm for the carabiner clip attatchment.

3. Mapping. The topological map on the Magellan could be zoomed to any level and was always crystal clear, whereas the OS map on the Garmin is a not-very-clear photo image of the landranger map (very blurry when zoomed in) with some street names superimposed.

4. Documentation. The instruction guide in the box is quite poor, and it is necessary to connect to a PC to access the full 60 page instruction book which is stored on the device.

5. Software. Garmin’s Basecamp software seems a big plus to many users,  and some UK companies offer training courses. It will display maps loaded onto the GPS as long as the GPS is connected to a PC. It is not yet clear to me if this will be valuable as there are many other online mapping and planning tools. Integration with the GPS will be a boon to those who want to pre-load routes onto the device, but this is not a current need for me.

Let’s try it in the field before making a final judgment!