Cougie is writ large in the history of the TGOC so I was a little surprised it was not busier. Most TGOers arrive here on the Saturday however, and anyway time has moved on and some of the people there have changed. My trip notes recorded ‘fantastic bird calls’ at the camping site here.

The place is quite remote, so to be kept awake by music until after 1am is strange experience and probably new in TGOC history!

This did not impede my morning start and a little later than Dave I packed my tent and headed over the hill to Torgyle Bridge. We’d been led to believe that beyond the watershed was a pathless and boggy wasteland to be negotiated before the comfort of a path in the forest which adjoins the road. In fact this was far from what we experienced.

The hillside was dry and provided easy walking, but once on the path in the forest all progress was frustrated by a huge area – approaching a kilometre square – of fallen trees. The only way was around at a cost of an hour or more delay. I heard that TGOers got completely lost in this jumble of timber and although a satnav provided useful information it does not help climbing over the obstructions. 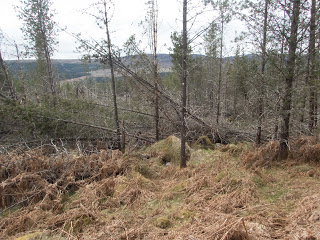 The road to the bridge is marked with new and smart houses, widely spaced and mostly empty. I  found a local resident from the West Midlands who confirmed that they are mostly holiday homes and largely bought for investment – many changing hands after 6 months or so. 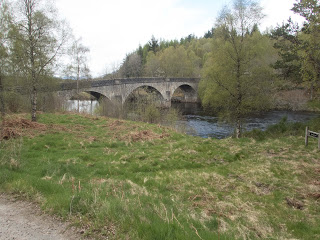 Beyond here is a march up and over the hill to reach Fort Augustus. Already en route are several lines of electricity pylons, and the service road which starts near to the bridge is hard to ignore. This is one of those TGO highways which are not so interesting or pleasant. Near the top the road is joined by General Wade’s Military Road. 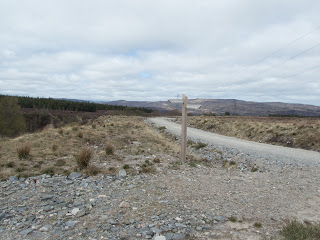 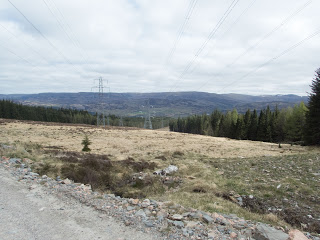 After a day of trudgery the last kilometre into Fort Augustus is charming with mixed woodland and an abundance of wild flowers and birdsong.

The campsite here held much promise with a bar and restaurant – but these were unfortunately closed. The village however provides a couple of pubs and restaurants enough for TGOers’ needs and there is a garage shop for supplies open until 8pm. 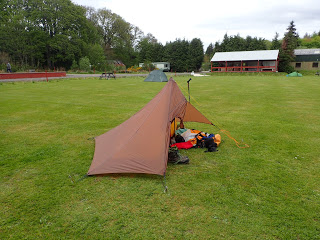 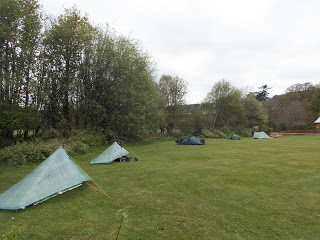 Here I learned again – as I do most years – that two sessions of a dryer machine in the launderette is not enough to dry one pair of woollen socks. One sympathetic TGOer Sheila advised putting the socks on my walking poles in the morning for a couple of  hours – that did the trick and by lunchtime they were dry.

We were about 10 on the small field and were much entertained by the bird population. They went about their business as if we didn’t exist – popping into tents to explore for tidbits, and leaving their mark. 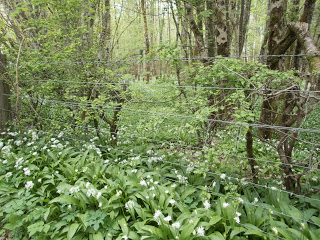 At 7:45 I was one of the first to leave, passing opposite the entrance a patch of woodland impressively abundant with handsome ransoms (wild garlic). 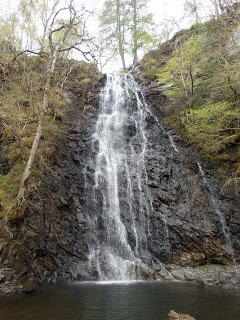 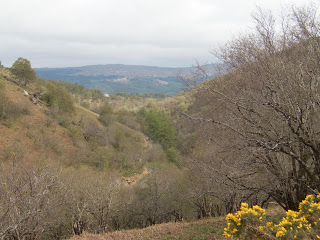 South from Fort Augustus is a path obvious only to me it seems, and I headed alone up Glen Tarf as I did on my very first challenge. This quiet track is banked with wild flowers and runs past a picturesque waterfall, and over some old stone bridges eventually leading to an abandoned and ruined settlement. 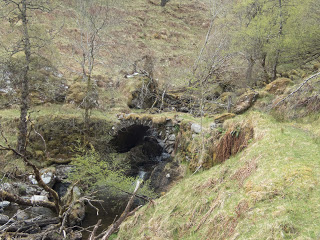 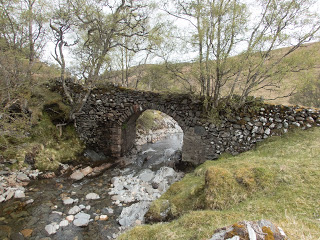 As the valley swings round to the east I continued up hill to the top Meallan Odhar and over to the military road so beloved by TGOers.

Here I found two other early starters resting and admiring the electric pylons. They were puzzling over their map which showed the pylons above the road, when they were very obviously below. To help them out I consulted my map – this showed two sets of pylons one above and one below. Also wrong!

Whatever, marching alongside pylons is not my favourite place to walk and I headed over the watershed and started the downward route towards Garva Bridge. Below, travelling very slowly I found another early starter Lindy Griffiths who seemed in trouble – a chat confirmed that she we not in need of help and she followed me into Melgarve Bothy for a cuppa a short while later. I arrived here with Nik Lawcock; Kirsty Patterson arrived shortly later having tried to walk along the ‘parallel roads’ above River Roy. Next came Lindy and as I was leaving first timer Paul Southward from Southend turned up.

There were lots of deer here on both sides of the track down to Garva Bridge and at the bottom, in the parking place, was a small camper van with the big and welcoming frame of Iain Sheil at the door. Another cuppa is always welcome; and a chat with Iain and giant ham sandwich doubly so. He was spending a couple of nights here meeting some friends on their route and welcoming any other TGOers that were aware enough to notice him. Apparently several had walked past oblivious to
his TGO sign beside the road. 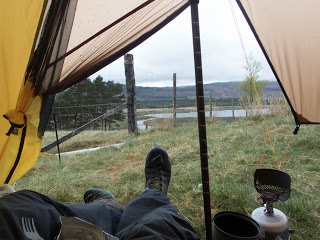 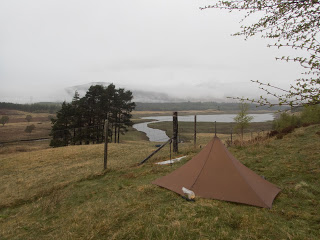 1-2 km further on is Glenhero lodge, here I took off to the south to camp at the edge of the plantation overlooking Glen Shirra. A large flock of deer grazed on the other side of the fence and the view towards the loch and the hills beyond made a pleasant backdrop.

A good path leads towards Kinloch Laggan with beautiful views of the lake spoilt by more electric pylons. I headed to the bridge near Inverpattack Lodge in order to investigate Pattack Falls. Both the falls and the Linn of Pattack were impressive after rain during the night.

My target is Dalwhinnie so from here I headed east on a path which takes me almost all the way the rising ridge of Meall Liath. My vetter made some intriguing remarks about Dirc Mohr which features here near my route and I determined to investigate.

Dirc Mohr is a narrow sloping canyon a kilometre or so long between two parallel cliff faces. Imagine both cliffs have been used for artillery practice – over a period of time – so much of the facing rock lies fractured and jumbled in the base of the canyon. Although pointing in the right direction this is hardly recommendable route to Dalwhinnie. The rock are covered with different grades of lichen  and in the wet some are treacherously slippy. The route is committing with no let-up for the whole length. Slow and careful going. 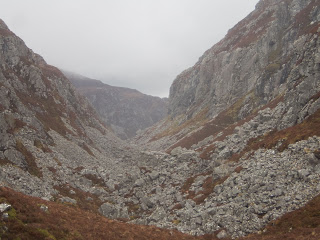 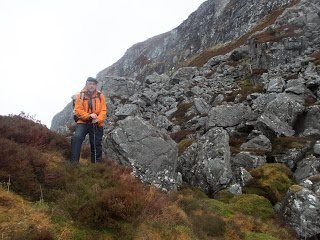 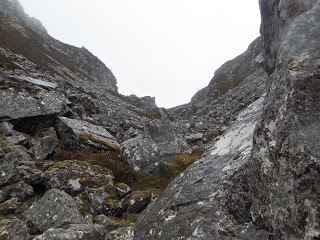 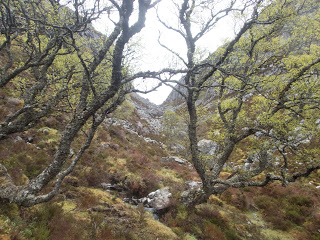 Once through, a kilometre or more brings you to the track down to the valley and the road. 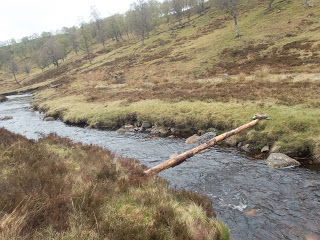 The bunkhouse and cafe at Dalwhinnie is a welcoming spot with a bit of a holiday atmosphere. 10 or so TGOers rested here – some camping, others using the bunkhouse. Ron and his wife provide great hospitality and good value food and drink. They had a wall of resupply parcels that people had sent for collection and they even sourced gas canisters for those who requested it. 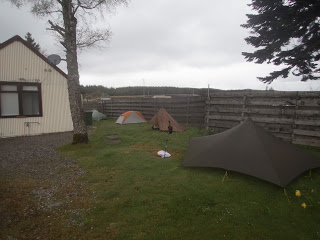 Ron opened the cafe early for the TGOers on Thursday morning with a big table laid for breakfast. An extra kilo or so in the stomach feels better than an extra kilo in the pack!

Most were heading towards Glen Feshie from here. In ones and twos people left for the path alongside the water viaduct which led into the hills to the east. This is reached to the south of Dalwhinnie – al little different from the planned start shown in the map below.

I soon caught up with David (Aylemore?) & David (Poole?). We walked together a short way until their paths divided. I continued little further, but lost the second Dave as he stopped to brew tea. As rain started Julie Harle came powering up the hill. We had the same idea – to navigate over the top and drop down to Gaick Lodge while many of the other chose a lower path further north.

We joined forces to find the route. In mist and cold, cold rain we used compass and GPS to keep us on track. After more than an hour of walking blind Gaick Lodge and the loch appeared through the mist below.

My apprehension about crossing the river was unfounded and we reached the other side with dry feet. Time to find shelter and a bite to eat. We found a small plantation nearby, but no sooner did we get our packs off than a Landrover appeared and the offer to use one of the sheds by the Lodge. Actually just as cold and also dark but we thanked them graciously before heading off again.

Now we went north then, beyond the loch, we sought out a path to the east to take us across to the dam on Allt Bran. Here we found Dave 2 seated by the wall eating his lunch.

This valley was strangely busy for such a remote place, with walkers, photographers, campers and not all on the TGO challenge. Soon we were on a track which lead down to the River Feshie and around 4pm we passed above the location of the TGO Cheese and Wine Party. We weren’t sure if it was a tent down there by the river or a rock – young Julie’s eyes were not much better than mine – so we walked on by.

We passed several wild horses on watch as we approached the river. Here it was necessary to remove boots before crossing. The water was cold but not too deep JH charged ahead while I tried to follow BMC guidelines about river crossings. It is always good to finish something like this when it has been hanging over you all day as a Big obstacle! For Julie this was not the end however as she had mislaid her gloves and I advised her to go back and find them. She crossed the river again, and of course once more having not found them. They were in her pack all along.

On her third crossing she came back with several young men she had found doing their mountain leader training. And then came Dave 2 from Dalwhinnie. To the north we could see smoke rising from the chimney at the Ruigh Aiteachian bothie, and before long we were joining several encampments around the building in this very pleasant spot, and chatting with the large group sitting inside by the fire. 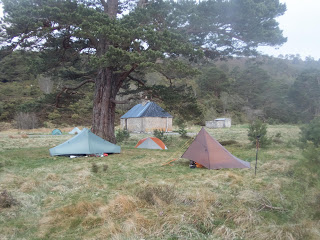 5 thoughts on “TGOC Plockton to Redcastle – #2 Cougie to Feshie”